I know I’ve been away for a long while, and this time it’s been for good reason. Life has been a mess lately.

The world is not crumbling around me, but I am falling apart while the world keeps moving. Or I was. Or, I don’t even know which word to use. Anymore it seems like it all depends on either who is asking me, or what time of day it is. I wake up on a high, and crawl into bed at the end of the day on a low. Or vise versa.

And there doesn’t really seem to be any rhyme or reason to any of it.

Is life bad? Not even close. I am blessed beyond belief. But there’s this constant state of self-doubt, self-awareness, self-hate that I can’t seem to get out of my head for more than a few days at a time.

Right now? Right now I’m not feeling the best, which is why I’m finally putting this into words, while my emotions are on high alert. Why? Because I said stupid things to people who didn’t deserve them. Why? Probably lots of reasons.

Now, let’s get one thing straight right off the bat. I have never attempted to hurt myself before.

But that doesn’t mean I’ve never thought about it, or that I don’t think about it.

Because I have, and I do.

Do you need to be concerned? Absolutely not. I have things in check. I know my blessings outweigh the negative in my life. I have people in life that depend on me that I can not fail.

But there are days where I really feel like the world and people in it would be better off if I weren’t.

I am a 29 year-old, semi-successful (one of my flaws), male. “The world is in front of me.” I have a great family – a marriage that is better than most I have ever known, great kids who love me and make me proud, and a job that I enjoy.

But I feel like such a failure. I feel like the negative things I do in life way outweigh the good. I feel like I am constantly disappointing people. It seems like every day I am finding a new person to fail. To anger, to hurt, to bother.

But I push through each day. I, generally, keep a smile on my face. 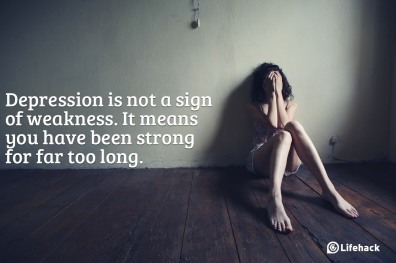 This is what depression really is. Depression is feeling like you are achieving all of your goals, yet they still aren’t good enough. Depression is having great people around you, but treating them like garbage for fear of hurting them (isn’t that ironic?). Depression is not even allowing people to know the real you for fear they will see all of your flaws.

Don’t look at my scars. Just keep looking at the smile on my face. A smile holds a thousand truths, but it can also hold a thousand lies.

Let me tell you one of my least favorite words in the English language – “fine”. “Fine” is such a nasty word. It is meaningless. It is full of lies. It is full of pain, anger, fear.

“I’m fine”. If I ever tell you these words, just know that I truly am not fine.

“You have all this good in life, there’s no reason for you to be feeling the way you do.” “What reason do you have?” “What’s so bad that you let it take control?”

Yeah. I get it. And I know. But depression doesn’t care about any of the good. It feeds on the negativity. It grabs hold and doesn’t let go. It will let up some, but it never lets go completely.

It will wait in the darkness for its opportunity to drag you right back down.

And it does. Every. Single. Time. It feeds on the self-doubt. Feeds on the failures.

About 3 years ago I was diagnosed as clinically depressed. I went through the whole thing of talking to my doctor, being medicated, everything. It was a low point in my life. There are certain things that I’ve only recently shared with my own wife. Some of the painful thoughts that have gone through my head.

If I were ever going to do something, I knew exactly how I would do it. There are points along the bypass where, if a car were to go off, there would be no coming back.

And I’ve had days where I have avoided the bypass completely for fear that I may actually do it.

Am I depressed right now? Probably not. But I know the beast is lurking in the shadows. It’s constantly there. Just waiting patiently. And I just feed it. I question all my decisions. I am more negative on myself than anyone else has ever been.

My flaws shine like the sun reflecting off a metal object. Blinding and overpowering.

I feel myself letting others down. Every day.

I have a lot of insecurities. Shocker, right? I compare myself to others and wonder what I am doing wrong to not have what they have. I see something someone else has, or does for their significant other, or their children, and the first thing I think is “oh, I wonder if my own wife/family/children resent me for not being able to do those things for them.”

And it hurts. It hurts so much to work so hard and feel like you are still coming up short.

How do I compete with these people? I can’t. And I shouldn’t ..

I meet new people and instantly search for their flaws so I have a reason to push them away. I would rather be a jerk and hurt someone else, than to allow myself to be hurt by them. Because it’s happened. Pretty much every time I let someone into my life. They either just completely ignore me, or they walk out of my life, and cause a lot of pain and suffering in the aftermath.

So I put up walls whenever I meet new people. And I build them high, and thick. And I am a jerk, say stupid things, and push them away.

I set myself up to be depressed.

I so badly want for someone to just tell me “yeah, I want to be your friend” but I don’t even give them a chance.

I so badly want for someone to ask for a sledgehammer so they can start knocking those walls down themselves.

I want someone to say “yeah, you’re worth it to me”.

But depression doesn’t have to be all-consuming. And it’s not always a bad thing. The best thing depression has done for me is helped me to realize the blessings I do have in my life. I can’t give my children the world, but I can make sure they are taken care of and have all the right tools to succeed in life. And they love me for what I do for them and give them. I can’t take my wife out on regular dates, or to give her the house of her dreams, or the vacations she deserves. But she loves me anyways, even through all my faults. She sticks by my side and helps me through the good and the bad. I don’t make a lot of money, but I have a good job that I’m not miserable in, with people I like being around, and I am able to still provide for all of my families needs, as well as some of their wants. 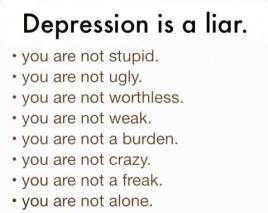 What am I missing in life? Probably purpose. I don’t know where I fit in in this crazy world. I pile so much onto my plate in hopes that something will eventually jump up and say “Me! Me! I’m your niche!”. And friends. I feel so alone in this world. I feel like people don’t want to be around me. But it’s probably because I don’t give them the opportunity. 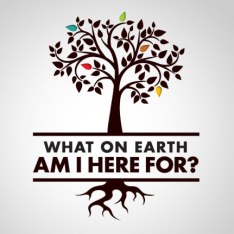 I have a good life. I know that. But I also have days of depression.

It doesn’t make me a bad person. It doesn’t take away from the good I have, or the good I’ve done.

It just means that some days are harder than others. And that I need to always focus on the blessings in my life. Because they are always there. No one is ever truly alone in this world. When depression kicks in, we just like to pretend that they aren’t. It’s easier to feed the beast than it is to fight back.

Always give life a chance. There is good in everything, and not everyone is bad or out to hurt you. People do care. Just because you don’t hear from them for awhile, or they don’t talk back right away, or write you back, or whatever, it doesn’t mean they don’t care.

Chances are, they just have their own demons they’re fighting that you know nothing about.